Information about local government meetings is being restricted by the non-profit charged with the duty to inform the public.
Here is what you need to know.

The People’s Press Project (PPP) is a media justice non-profit operating in the largest midwest metropolis between Spokane WA, and the Twin Cities. Over the past few years, the analysis by the PPP of public access media has mirrored the rest of the country: most of the country’s public access stations have been gutted; leaving most rural areas with poorly funded public access stations, if any. The Fargo-Moorhead region of North Dakota and Minnesota are no different.

Although Fargo and Moorhead collectively receive millions each year to fund “public access” or PEG programming  (Public, Educational, and Governmental), the cities have absorbed the monies from franchise agreements intended for the public trust and all but obliterated the “free speech” public access programs that were intended to provide.

Millions of dollars are provided through cable access franchise agreements paid to cities to access every resident’s’ property. Those monies are given to establish “public access” programming, stations, staff and equipment. Yet locally we have limited public programming.

In Fargo there is limited broadcasting of government meetings with no regularly staffed studio or public and educational programming production.

The city of Moorhead has charged a non-profit organization, Moorhead Community Access Media (MCAM) with the task of providing these services and administering public funds. In 2010 the city of Moorhead gave MCAM $57,000 from the $337,802 they received from Cable One and Mid Continent for cable access programming. However, the public’s knowledge of services, programming and use of this public trust is minimal. The People’s Press Project set out to analyze, educate and improve access in our area.

To read more on the intended use and laws for “free speech” local public access stations visit:  http://www.fulldisclosure.net/oldsite.php?url=/Blogs/88.php

What we learned about our local status and the status of public access nationally was alarming: We learned that public access information is in danger. 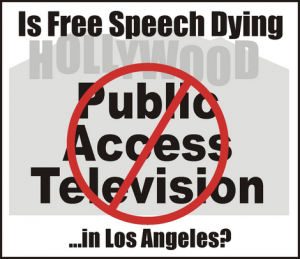 investment as a government leader.

“Public access was anybody from the public have[ing] access to the airwaves. I truly believe that public access is an electronic soapbox. It is a free expression first amendment right. And, the cable company has an obligation to provide that channel.”

“That’s what local origination of public access offered. Where people’s opportunity to express themselves” was not trespassed, adding that “people would watch it because they want to be informed, they want to be educated. They want to connect themselves to the world they are in. I think there is a crying need out there for real substantive public affairs programming which unfortunately, doesn’t exist.”

“Some of us, like me, who happen now to be an elected official at this point in my life, strongly believe that monies should be used for public, government and educational access. No matter what.”

Ed Asner, Former President of the Screen Actors Guild had this to say:

“This is the Internet in terms of TV. Without this public access to TV, there is no Internet for television.”

“Public access stations are growing dark across the nation. And the loss is alarming!”

“Public access really is the only venue for..training, for forums on discussion on both sides of an issue, that evolve and are not just a 25 second sound bite on the local news at six o’clock at night. “

The People’s Press Project has been doing an assessment of where our local public access dollars are going. Unfortunately, like most of the country, they are being absorbed by our local governments without our input.

“There are big telecommunications companies that want to take over the bandwidth that public access stations are carried on. Because, they can take those frequencies and use them to sell high speed internet, broadband internet, which is a is a very lucrative business. So now, they’ve gone to a state level and they’ve gone to the states and say ‘You don’t really need public access. We’ll give you a bunch of money, give us the bandwidth’. That’s where the battle is going on now.”

That battle is happening in our community. Our local access is nearly non existent. And what we do have is severely limited. Given the lack of local infrastructure to support the only local access station, MCAM, the PPP has been poised to train and prepare citizen journalists to produce, broadcast, host, and report on some local government meetings, without any financial support!

With all the millions being poured into local “free speech” rights public access, the issues of access should be minimal. However, the reality is that local communities don’t always know how these monies are being administered, as Pasty Robles from San Antonio Public Access explains:

“I think the sad part about it is that there is money coming in. That money is still being paid to the city. But they are not using it the way that we feel it should be used to benefit the entire community”.

And that worry extends to this region. Because if we can’t control our local airwaves, we are unable to represent the voices of our community. And frequently, those voices are drowned out.

The PPP’s analysis of our local public access services has yielded poor results. But we hoped to improve and rectify our local access issues through education and awareness and by pushing our elected officials and local access to champion an expansion of PEG (Public access, Educational, and Government) programming. Unfortunately, the privately run non-profit charged with this duty (remember, Fargo has NO studio) MCAM, has failed to ensure this public trust!

Elaine Alston, producer of “Dreams” said “We need public access. Whatever you have to do, do it. To make sure that public access is here for the people!”

And there remains a great concern for maintaining that public trust for information locally.

Ron Kaye, former editor of the Los Angeles Times (1984-2008) posited “[W]e can, with any kind of support, bring television and open it up to neighborhoods councils, homeowner groups, and activists of all sorts of people who are involved in the community to tell the story that the officials don’t want them to know”.

Airing local government meetings has become a hallmark of the People’s Press Project. However, our local public access station in Moorhead is failing its mission to provide access to organizations, like the PPP, that watch-dog government entities and report to the public about their activities. Because we believe that as an engaged community, we must know what our elected officials are doing we are pushing for there to be an open public record of their decisions that we can all review and discuss.

And, Robert Sherretta, producer of ”International Investor” agrees saying “I worry that when we’re seeing closures of public access it’s just a referen..especially by local governments, to shut down dissent and criticism of what they’re doing and what their activities are.”

This is a strong lesson locally and one we should heed if we are to maintain strong local engagement in democracy and a commitment to transparency in government. As an elderly Stanley Sheinbaum an ACLU First Amendment Advocate warns:

“The public, if they are to vote properly, have to be kept informed. So, public access is critical.”

So, how sacred is Public Access television to our community and to our democracy? According to Scott Minerd, Chief Investment Officer of the Guggenheim Partners, it’s imperative.

We at the PPP agree. We feel strongly that access to the only public access station afforded to us within the Fargo-Moorhead region should support citizen journalism training, public access, and programming. Restricting access or arbitrarily setting rules that limit the public’s ability to report on government meetings and activities are an affront to our free speech rights and a misuse of the public trust. The MCAM’s current campaign to limit the People’s Press Project’s access to recording equipment, is just that.

Demand your rights to public access services including studio time, access to equipment and staff for production and broadcasting of public programming, and citizen journalism training. And most importantly, don’t let media justice watch-dog groups such as the People’s Press Project disappear! Let MCAM, your local and state governments and everyone that tries to stifle or hijack our local free speech rights know they can’t!

The People’s Press Project has worked locally for nearly two years to bring the Fargo Moorhead Community local governmental meetings and to host and archive information for the public. Although this work has been largely unfunded and local governments have been slow to support it, it has gained wide appeal and has been embraced by local government officials who seek greater transparency in government and democratic engagement. The last frontier remains our local access station (MCAM). We urge you to support our fight to give access, support, and training to local citizens engaged in gathering and disseminating information about the actions of local government. We cannot allow any local entity to stifle our rights to freedom of information and press!

MCAM and our local officials need to remember the words of Article 19 of the Universal Declaration of Human Rights stating:

“Everyone has the right to freedom of opinion and expression; this right includes freedom to hold opinions without interference and to seek, receive and impart information and ideas through any media and regardless of frontiers.”

For full quotes and video from this article go to : http://www.fulldisclosure.net/oldsite.php?url=/Blogs/88.php