PPP Banned from Public Access Television Studio and Equipment Use 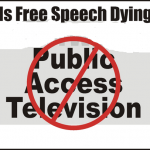 The MCAM board of directors held a meeting to address a complaint that the PPP had submitted to them on the heels of PPP being pressured to pay exorbitant membership fees and undocumented accusations from the MCAM General Manager, Tony Tilton. The MCAM board held a meeting that was dominated by unfounded and undocumented accusations by MCAM General Manager and the MCAM board of directors ignored the written testimony submitted to the board by PPP prior to the meeting.

The MCAM board unanimously decided to suspend PPP from all use of MCAM facilities based on the wishes of the MCAM General Manager Tony Tilton.

Watch the meeting videotaped by the PPP:


PPP will be appealing this decision by the MCAM board of directors and will keep the community informed of the reluctance of the MCAM board to fulfill their mission and vision for the community to strive “to be the leading venue for public information and creative expression in the region by offering quality equipment, education and media access to all members of the community.” (MCAM vision statement)

For background information, read Put the “P” back in Public Access Television