Following the publication of The People’s Press Project (PPP) article Put the “P” back in Public Access and the PPP letter to Moorhead Community Access Media (MCAM)  on www.fmppp.org, Civil Rights and Media Justice leader and Director of the Center for Media Justice, Malkia Cyril contacted PPP with her support and a desire to weigh in on local issues with Cable Public Access in the FM region. We have a great opportunity to address this very important issue of access at this time, and to improve the access to our local communities in Fargo Moorhead.

Malkia Amala Cyril is the founder and Executive Director of the Center for Media Justice (CMJ), launched in 2008 to strengthen the media activism and communications capacity of grassroots social justice movements. For the past 15 years, Malkia’s award-winning work has empowered local social justice leaders and organizations with the skills and strategies they need to navigate the complex media environment of the 21st century. Appearances include News for All the People: the Epic Story of Race and the American Media, the New York Times, Politico, Huffington Post, Media Matters, Democracy Now, Essence Magazine, Village Voice, the Advocate, the SF Chronicle and documentaries including Outfoxed, Broadcast Blues, and MissRepresentation.Malkia Cyril

We look forward to this interview and will be recording it and publishing a podcast on the www.fmppp.org website. The PPP has received an outpour of support, not just from local citizens concerned about access to local cable access stations, but from national Media Justice organizations and from the Media Access Grassroots Network (MAG-Net).

People from all over the country and locally have already engaged in this issue and signed a petition generated through Change.org.  the petition can be viewed and signed here.

The People’s Press Project is Fargo-Moorhead’s only non-profit dedicated to empowering the community to impart media, rather than being consumers of media. We stand for the development and proliferation of Independent Media and the creation of new community based journalists to inform the community of the real news by the people and for the people. We do this through training, access to equipment and strategic opportunities to develop media through Independent news sources, Social Networks and through the web. 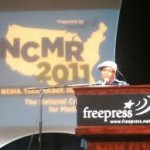 The People’s Press Project (PPP) had the opportunity to visit with Malkia Cyril to talk about Media Justice and PPP’s work on preserving Cable Access in the Midwest.

To keep updated on this issue and to listen to Friday’s podcast of Malkia Cyril, visit www.fmppp.org, or on facebook at: www.facebook.com/PeoplesPressProject