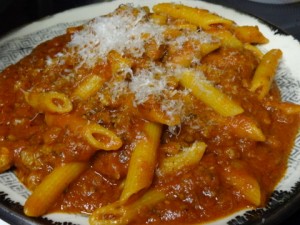 Tomato sauce, red sauce, meat-sauce or gravy, whatever you call it, it’s a classic. The thought of meat sauce conjures images of Italian Grandmothers wielding giant spoons, stirring cauldrons of tomato sauce. However that would be incorrect, but with the addition of one word we can conjure up a more historically accurate image. American…

What we think of as meat sauce would be unrecognizable to Italians. That’s because, meat sauce or Ragu, which originally hails from theBolognaregion in northernItalyhas cream in it. So, what happened, that we now associate meat sauce as the red thick sauce we all enjoy today?

She explains the Italian migrants in the early 19th century came from southernItaly, likeSicily. By using the ingredients they found in America they attempted to replicate the food they knew from home and thus created the genre of cooking we all know and love, Italian American cooking. She continued, “It’s part of the American History, because it reflects the products ofAmerica, the history of those early immigrants.” 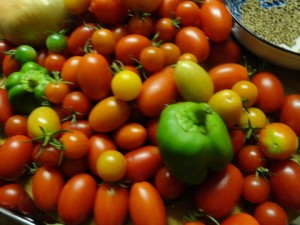 Until recently I had never made an excellent meat sauce but then while I was researching something else a Google search turned up a curious website. http://shesalty.tumblr.com/ Which is a website ran by a young woman who started a blog while she attended The Culinary Institute of America. I jotted down her recipe for Tomato sauce (which I would call meat sauce) and found the secret to meat sauce.

The secret is outta the can…

I always used fresh tomatoes, so when I read this canned recipe I looked around. In the same aforementioned interview, Lidia Bastianich says “People are always fresh-fresh-fresh, but I think a good plum tomato in a can, whole in their juice makes a better sauce.” After I read that I checked two separate cook books by the king of seasonal Italian cooking; Mario Batali for his tomato sauce recipe both the same… Canned tomatoes.

So I made shesalty.tumbler.com’s recipe for Meat sauce here’s how I did it so you can do it too…

She uses by the bunch: rosemary, oregano, parsley, thyme, fennel, salt and pepper.

Start by browning meats over medium heat, once browned remove some fat if desired and add onion, cook onion until translucent (about 3 min) add garlic cook for about a min. Now we deglaze with our wine, just do us both a favor and take it off the heat first, stir the wine in and put pan back on the heat. Then we add our canned tomatoes; don’t bother slicing them they’ll deconstruct while cooking. Follow that with out can of tomato sauce, tomato paste water, seasonings, salt pepper and lemon.

Simmer for as long as possible, if it starts to thicken up, add some pasta water from whatever pasta you are making. Now that the beans are out of the can… Sauce, it’s nice to meat you…

*Joshua Steiner is a food obsessed individual who has worked in restaurants and kitchens for most of his life and held just about every conceivable job in the industry. Now he’s bringing his tips, tricks and travels to The High Plains Reader and @thepeoplespressproject.org for you to use in YOUR kitchen.