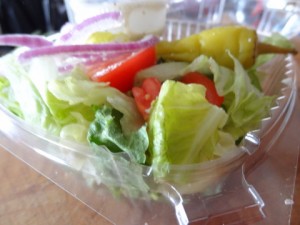 You don’t make friends with salad…

We’ve all experienced a “Greek salad” at the local sandwich shop, or diner, whose version of the Greek salad typically contains a copious amount of limp iceberg lettuce, some sprinkles of feta cheese, a pepperoncini, a couple of awkwardly sliced raw onions and a pair of cucumber slices. Lastly American Greek salads usually include a couple of tasteless, pale, refrigerated tomato wedges.

*(Never refrigerate tomatoes because they are prone to what specialists call “chilling injury.” Barry Estabrook writes in his book Tomatoland; that years of effort by a plant breeder can be destroyed by a few days in a refrigerator.)

This giant Greek lettuce salad with few accouterments coincidently looks nothing like an actual Greek salad. Author and former NY Times restaurant reviewer, Frank Bruni, describes this phenomenon better than I can in his Memoir Born Round:

– “The Greek salad in our country tends to get distracted with vapid and unnecessary lettuce. But in its 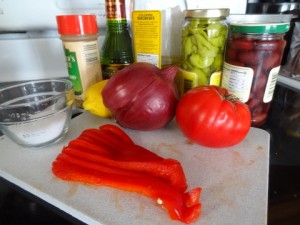 birthplace it sticks for the most part to juicy cucumbers and juicier tomatoes and a sheep’s worth of feta, which isn’t crumbled but presented in thick rectangular slabs. If there are olives they’re dark and robust. It’s as much a cheese and crudite plate as it is an actual salad, and if it’s large enough it can definitely pass for a meal.”… Frank Bruni

Sounds delicious right? What our friend Mister Bruni is referring to is, the Village Salad or Horiatiki Salata. I have slang my share of these salatas when I worked at a steak house owned by Greeks, though their version had red onions and was served with appetizers, like fried Kasseri cheese (Saganaki) instead of feta. You can find a recipe for saganaki cheese coming soon to an internet near you @ www.hpr1.com .

The reason Pfizer can profit 3 billion in one quarter…

At http://www.vrg.org/recipes/vjgreek.htm Larry Litt blogs about the cultural, relevance of this simple, peasant salad in an interview that he had with a Greek hostess in a restaurant in Delphi, Greece. When he questioned the lack of lettuce he was told…

-The myth of Adonis who was so beautiful, he could even make the Goddesses take notice. Adonis brazenly attempted to steal Hera away from Zeus. Before long the nymphs found Adonis missing, while looking for him they found his body in a lettuce patch. The God’s anger over Adonis’ attempt to covet a Goddess had culminated into the turning of Adonis into a wilted head of lettuce. Since then lettuce has become for the Greeks a symbol of impotence…

But, really Grecians do have lettuce salatas too, such as Anamikti Salata containing lettuce, carrots, and cabbage, but that’s a different post. Today we will focus on the Horiatiki Salata, because it is the Greek standard and is served with just about every appetizer (mezes) and left on the table until finished. So we better eat our share, here’s my variation so Horiatiki Salata won’t seem Greek to you.

1 cucumber halved deseeded and sliced into disks (If you are like me and can’t do cukes; sub with artichokes hearts or capers)

You will do: Set cheese aside, combine all vegetables, drizzle with olive oil and lemon juice, liberally salt, then season with pepper and oregano and set aside. I like to marinate for at least 30 minutes before I tear into it, if you can’t wait that long… Don’t. Lastly plate your marinated and seasoned veggies and top with a brick of tasty feta. Eat, repeat and enjoy.

Now that you know the process, you’ll find although horiatiki salata might sound Greek, really it’s simple, tasty and even healthy… Opa!

*Joshua Steiner is a food obsessed individual who has worked in restaurants and kitchens for most of his life and held just about every conceivable job in the industry. Now he’s bringing his tips, tricks and travels to The High Plains Reader and @thepeoplespressproject.org for you to use in YOUR kitchen.