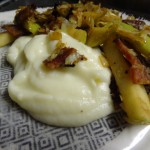 The news is often bullfinch…

The Chef who was hosting WHDH channel 7’s Sarah French was Chef Aline: courtesy of Flat Iron restaurant in Boston’s Bullfinch Hotel (she said BACON).  Ah ha…  I’ve been to this place, as the Bullfinch hotel is within walking distance from the Gahden or TD Garden (home of the Celtics) which makes it the go to hotel when in Beantown to see a game.

They hype themselves as a Tapas restaurant, selling small plates in accordance with Spanish tradition.  I personally have never eaten there.  I once thought about it, as my wife and I sat down at the bar, ordered beers and asked the bartender about the food.  Her reply was less than satisfactory as she replied, “Yeah, the food is kind of good, I think the meatballs are pretty good.”  (No mention of BACON) Pretty good, hardly a glowing endorsement, we finished our beer and went somewhere else, it is Boston after all.

If the bartender had said warm apple cabbage slaw with bacon, I would’ve been forced to order at least two portions.  However she didn’t so when I later saw this dish on the Dish I made it at home, with a few changes for health or pantry’s sake but otherwise stuck to the script for an imaginative and tasty dinner that is just a little bit outside the realm of usual.

The first major change, I left out the pork chop, omitted it entirely, because it doesn’t matter who you are nobody needs more than one form of pork in one sitting.  As tempting as it is, that is…  Secondly since we omitted the pork chop, we can add 2 extra strips of bacon to the mix.  Furthermore instead of heavy cream in the parsnip puree we can sub in 2% milk and add way less of it to turn the puree into mashed turnips.  Lastly, I didn’t have shallots on hand but I did have some home grown onion…

Warm apple cabbage slaw with BACON, you will need: 4 strips of bacon, 1 cup grated cabbage, 1 tspn diced onion, 1 sliced apple, 2 Tblspns apple cider vinegar, 1 Tblspn sugar, sprinkle of red pepper flakes, salt and pepper.  (oh yeah, I just went ahead and used a full apple, what do ya’ do with half an apple?)

You will do:  Cook BACON until desired  texture is reached remove, set aside and drain grease except for 1 Tblspn add onion and apple cook until softened add everything else and cook until most of the moisture is gone, dice bacon and add to the mixture, remove from heat and set aside.

Mashed Parsnips: you will need 8 OZ’s parsnips, rinsed and boiled until soft, ¼- ½ cup 2% milk, salt and pepper…  You will do:  boil parsnips until soft, drain, move to blender along with ¼ cup milk, salt and pepper, blend briefly just until incorporated and a mashed potato texture is reached, add more milk only if necessary.  Bacon (I just realized I had a whole paragraph that didn’t mention bacon).

Lastly top your cloud of mashed turnips with your warm apple cabbage slaw with Bacon, eat and repeat.  You’ll find yourself eating something slightly out the realm of usual, not quite Asian, but not quite not Asian either…  What the hell does that mean?  It doesn’t matter it’s served with BACON…

Joshua Steiner is your restaurant insider and weapon of mass kitchen instruction.  Keep your arms inside the car at all times…  You must be this high to enter, it’s going to be a wild ride.  In between high fructose corn syrup drone attacks and genetic modifications of organic food, he still finds time to remain skeptical that people read editor’s notes… Bacon