In Heitkamp-Requested Study, NDSU Finds Significant Loss in Farm Revenue Due to Delays in Ag Shipments 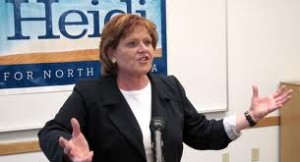 WASHINGTON, D.C. – A conservative estimate of how much revenue North Dakota farmers have lost due to agriculture shipment delays over the course of the previous four months is $66 million, according to a study U.S. Senator Heidi Heitkamp asked North Dakota State University (NDSU) to conduct. The study also found that if conditions don’t improve, farmers could stand to lose an additional $95 million in income.

In her efforts to highlight how much North Dakotans are struggling due to rail traffic congestion, Heitkamp asked Dr. William Nganje, Chair of NDSU Agribusiness and Applied Economics Department, to quantify the economic harm the state’s agriculture industry is experiencing.

“This report confirms what I have been stressing to government regulators and the railroad industry: the problems with ag shipments are threatening the livelihood of the thousands of North Dakotans who are involved in agriculture,” said Heitkamp, a member of the Senate Agriculture Committee. “I thank the talented researchers at NDSU for putting together this information, which reinforces why we need to help our farmers get their supplies and move their crops to market. I’ll keeping pushing on federal regulators and industry to make that happen. This study also reminds us how fortunate we are to have a premier land-grant University in our state. NDSU’s ability to get timely, helpful information to the public is second to none.”

NDSU found that there has been approximately $66.6 million loss in North Dakota farm revenue for wheat, corn, and soybean crops that were sold from January through April 14, and there is a potential of another $95.4 million loss if the status quo conditions remain. Wheat, corn and soybeans are three of the largest crops by acreage planted in North Dakota. All three rely heavily on freight rail transportation to be moved to market.

This is a conservative estimate, because “this analysis was limited to spring wheat, corn and soybean, and does not include potential losses for the sale of durum wheat, barley, sunflower, canola, field pea, lentils, dry edible beans, flax, oats or food grade soybeans,” the study says. “There was not enough readily available information to include these extra crops in the analysis. In addition, this analysis does not include the increased costs incurred by North Dakota agricultural businesses to transport processed agricultural products out of the state. Examples include refined sugar, ethanol, dried distillers grains, high fructose corn syrup, wheat flour, semolina flour and pasta, barley malt, canola and sunflower oil, and canola and sunflower meal.”

Heitkamp has repeatedly pressed the railroad industry to fix inadequate agriculture shipping service in our state. Last month, she urged the U.S. Surface Transportation Board, which is tasked with resolving service disputes, to exercise its authority if service does not improve. She has also been in regular contact with BNSF Chief Executive Officer Carl Ice to express her concerns. As service was severely diminishing over winter, Heitkamp told BNSF about the great economic impact the delays are having on North Dakota.