In Addition to Senators, U.S. Energy and Transportation Secretaries to Participate, as well as top White House and Interior Officials 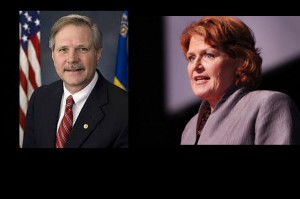 WASHINGTON, D.C. – U.S. Senators Heidi Heitkamp and John Hoeven today announced that the U.S. Department of Energy’s (DOE) meeting in North Dakota for its nationwide review of the country’s energy strategy will take place atBismarck State College on the afternoon of Friday, August 8, 2014.

The meeting is part of President Obama’s Quadrennial Energy Review (QER), which will include a series of meetings across the nation to examine critical energy issues and help the Administration develop a strong national policy for energy infrastructure. Heitkamp, who called on DOE Secretary Ernest Moniz to hold one of its meetings in North Dakota, and Hoeven, who proposed establishing a quadrennial energy review to the White House two years ago and included the proposal in his Domestic Energy and Jobs Act, will speak during the meeting, as will Secretary Moniz, U.S. Department of Transportation Secretary Anthony Foxx, White House Office of Science and Technology Director John P. Holdren, and Assistant Secretary of the Interior for Land and Minerals Management Janice M. Schneider.

“To truly talk about our nation’s energy strategy, it has to include North Dakota. That’s why I pushed for Secretary Moniz to hold one the Department of Energy’s national energy policy meetings in our state,” said Heitkamp. “North Dakota is on the forefront of energy development and we’re doing it all – oil, gas, coal, wind, and biofuels. We have a great deal of insight to offer as the Administration seeks input from communities across the country about energy transportation, infrastructure, and development, and I hope many North Dakotans will offer their thoughts.”

“In July of 2012, we filed legislation that called for a quadrennial energy review as part of a comprehensive energy plan for the country,” Hoeven said. “We included it in the Domestic Jobs and Energy Act, a bill that will help create a ‘states first,’ all-of-the-above energy plan for our nation similar to the Empower North Dakota plan we built for North Dakota from 2002 to 2010.”

The goal of the QER is to help the Federal government better meet its responsibility of providing affordable, clean, and secure energy services to Americans. The initial focus for the QER will be our nation’s infrastructure for transporting, transmitting, and delivering energy. The meeting in North Dakota will focus on infrastructure constraints, with a specific focus on the Bakken. In addition to North Dakota, regional meetings are scheduled around the country, including in New England, Louisiana, Oregon, Illinois, and Wyoming.

Heitkamp has continued to have an open dialogue with Secretary Moniz, and continues to press him about the importance of finding a viable path forward for coal. In June, Heitkamp participated in a discussion with leading energy and government experts in Washington, D.C. about her legislation to incentivize companies to invest in and support further research and development of advanced clean coal technologies. At Heitkamp’s request, Secretary Moniz also participated in discussion.

Heitkamp, who has more than a decade of experience working as a director for a North Dakota energy company, has repeatedly fought unworkable proposals that would take coal out of our energy mix, and she has put forth pragmatic solutions to make sure we maintain a reliable supply of baseload power by finding a path forward for coal as part of a true all-of-the-above energy strategy.

Hoeven, who serves on the Senate Energy Committee, has long pushed for a comprehensive, all-of-the-above energy plan for the nation similar to Empower North Dakota, the plan he launched a decade ago in North Dakota that develops all sources of energy, traditional and renewable. Two years ago Hoeven’s office proposed establishing a national energy review similar to the review the Defense Department conducts every four years to Heather Zichal, former senior energy advisor to President Obama.

Hoeven also included a requirement for such a review as part of his Energy Security Package, which includes his Domestic Energy and Jobs Act (DEJA), a comprehensive plan for national energy development. DEJA is a wide-ranging package of 12 diverse energy bills addressing both traditional and renewable development.

In addition to a proposed quadrennial energy review, included in the measure are provisions to streamline and simplify regulations, boost domestic energy supplies, build American energy infrastructure, and safeguard America’s supply of critical minerals used in modern high-tech manufactured products such as cell phones and computers.

Individuals can submit comments prior to the event on the Department of Energy website.