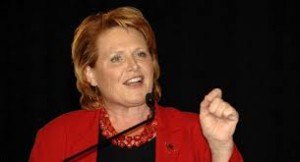 Heitkamp played a key role in crafting the legislation and building strong support for it. Last month, she recruited 10 other Democratic Senators to join her efforts to put pressure on the President to make a decision on the pipeline. She then worked hard to get all of those Senators to sign onto today’s bill, which is the largest number of Democrats to sign onto legislation supporting full approval of the Keystone XL pipeline.

“We continue to hear delay, delay, delay from the Administration about the Keystone XL pipeline.  I’m beyond sick of it,” said Heitkamp. “We have strong bipartisan support in the Senate for this project – and I’m proud to have recruited support from 10 other Democrats last month.  Now, all of those Democrats also signed onto this bill that we crafted to fully approve the construction of the Keystone pipeline.  If the Administration isn’t going to make a decision on this project after more than five years, then we’ll make it for them.  End of story.”

Heitkamp has long been a fierce advocate for the construction of the Keystone XL Pipeline. She has repeatedly taken action to move the project forward, including: