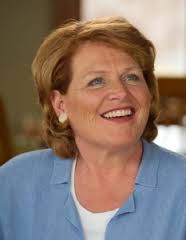 Heitkamp has called for workable solutions, and in March, she introduced legislation to help incentivize utilities companies to invest in clean coal technologies that would make it affordable for coal plants to lower emissions. Coal provides nearly 80 percent of North Dakota’s electricity and supports more than 13,000 jobs in the state.

“Let’s be clear – if we must reduce greenhouse gas emissions, we have to do it in a way that makes sense for consumers, workers, and our economy. Today, coal produces 40 percent of the electricity in the U.S., and nearly 80 percent of the electricity in North Dakota. I’m still reviewing this extensive rule to determine the impact on the U.S. and North Dakota. We need policies that support coal – defending jobs, keeping energy costs low, and maintaining reliability in our electric grid – and that also help develop technology that is not yet widely available to reduce emissions. We need a true all-of-the-above energy strategy – which the Administration claims to support – and it has to have a place for coal in our energy mix in the present and future.

“After working in the energy field in North Dakota for more than a decade before joining the Senate, I fully understand the importance of clean coal technology. And I also understand that we need real, workable solutions to find a viable path forward for coal. That’s why I introduced legislation in March to incentivize utilities to develop clean coal technology to reduce the footprint of coal companies while also making sure this reliable and redundant energy source continues into the future. But this technology won’t be developed overnight or available for use tomorrow or even next year. It takes time and significant investment and government buy-in.

“We have to work together and develop achievable rules that reduce emissions, but do not restrict economic growth or harm the reliability of our electrical system. I appreciate that the Administration heeded my request to extend the comment period for this new rule to 120 days so everyone impacted by it has time to analyze the rule. And after showing Administrator McCarthy around North Dakota in February, I’ll continue to work with her and push for necessary changes to this rule and others so they work for all states, especially states like North Dakota that rely on coal-fired power and have already greatly reduced emissions over time.”

Last week, before the proposed regulations were announced, Heitkamp led a bipartisan coalition of 47 Senators in calling for a 120-day public comment period for the rule. Heitkamp wants North Dakotans, utilities, rural electric cooperatives, employees, and consumers to have sufficient time to analyze the rule and its potential impacts on reliability, electricity providers, jobs, and the economy.

Heitkamp, who has more than a decade of experience working as a Director for a North Dakota energy company, has repeatedly fought unworkable proposals that would take coal out of our energy mix, and she has put forth pragmatic solutions to make sure we maintain a reliable supply of baseload power by finding a path forward for coal.

Heitkamp is a staunch supporter of North Dakota’s all-of-the-above energy strategy that is leading the way toward North American energy security and independence. For more than a decade, she was on the board of directors for the one-of-a-kind Dakota Gasification synfuels plant in Beulah, North Dakota.

Since joining the Senate, Heitkamp has been committed to finding a realistic avenue for clean coal by: