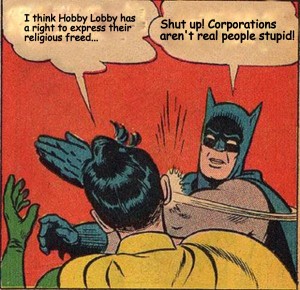 I had a FB friend state that he thought that the Supreme Court opinion in the Hobby Lobby case was right. I’ve stated before that an opinion without a rationale that is based upon both facts and logic is meaningless. It is no better than an adamant goat bleating in the barnyard. That many in this country have confused the right to have an opinion with the notion that all opinions have equal value or validity. They do not. Here is why the Hobby Lobby decision is wrong.
The Hobby Lobby decision is wrong because it is based upon a fiction stacked upon a fiction stacked upon another fiction. Worst of all, it does not protect an individual’s right to their freedom of religion. It completely subverts and obliterates an individual’s right to freedom of religion.

Fiction 2: Corporations can hold a religious belief. As stated above, a corporation is a legal fiction. It is an entity that amounts to some dusty papers filed with a secretary of state. It is allowed to form by statute. It’s ‘personhood’ is a legal fiction that simply allows it to sue or be sued. It is not an actual person. As such, it cannot have a religion. Since it is a legal fiction, that is, not an actual person and cannot have a religion, it cannot have ‘freedom of religion’ since it can’t even have a religion. Nowhere in the Constitution of the United States is a corporation called an actual person. Nowhere in the Constitution of the United States is there a provision for a corporation to have a religion or have the right to freedom of religion. There is no constitutional basis for the notion that a corporation can object to a violation of its religious rights. Further, as stated under Fiction 1, corporations separate the owners from the corporate entity. The notion that the corporation has the religious beliefs held by the owners when they are legally separate identities is a flying leap into irrationality.

The decision in the Hobby Lobby case does not protect freedom of religion. It subverts and obliterates freedom of religion. Freedom of religion is the right of an actual person to practice his/her religion as he/she sees fit. It proclaims that a fictional entity can have a religious belief. And that this trumps the actual religious freedom of actual people. It makes real people have to pay extra to exercise their own actual religious freedom. They already paid for the insurance with the product of their work. Now they must pay again because the corporation making money off them, getting tax breaks for providing insurance, and getting groups rates for that insurance, won’t let them enjoy the benefit contained in the insurance policy that they already paid for with the product of their labor.