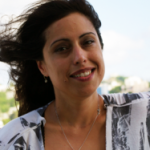 The country is poised to pass immigration reform policy that has previously been impossible in the last two administrations, despite the fact that President Bush Jr. started campaigning for comprehensive immigration reform when I was still in college! Something has been happening in America.

Latinos have watched as both Bush and Obama ratcheted up border patrol and immigration enforcement policies with the Secure Communities programs, the passage of Arizona’s (and many other states’) SB 1070 type bills. We’ve heard and felt the racist rhetoric in the news and  watched raid after raid; we’ve seen thousands of Mexicans across the country dismissed from their jobs. We know nearly a quarter of a million Mexicans are being detained each year, and deported (more during Obama’s presidency than during Bush’s, if you can believe that) and we have watched the private prison industry (and the politicians who instituted the laws to allow the private prison complex to begin) line the pockets of the wealthy, off the bodies of Mexican people.

We have watched Dreamers, young undocumented Mexicans trying to get an education and stay in the only country they know as home, have their hopes rise and be dashed time and time again.

Currently that battle is happening in Minnesota and Rep. Ben Lien (651-296-5515 or 800-657-3742 -E-mail: rep.ben.lien@house.mn) has a key vote on the Dream Act II, which would make citizenship a possibility for many young Mexicans. Those interested in urging him to make a difference for Dreamers can contact him.

And, although movement change and policy change are sweeping the country where Mexicanos are concerned, in Moorhead, MN there is nothing coming from Centro Cultural, the Mexican Cultural Center. Our hard fought Mexican community center, has been hijacked. It doesn’t have programming. There is no voice of leadership coming from it. There is no leadership development coming out of it. People who have approached the board to do outreach, programming, and services for Mexicans and their development have been kicked out, denied, or (like me) simply ignored. We have a serious problem if our only Mexican community center is not doing anything for the Mexicans in this community.

Especially if you consider that Centro Cultural (with the help of People Escaping Poverty Project mentor, Duke Gomez-Schempp) helped secure funding for the organization precisely to develop leadership activities and programming in the Mexican community. That funding came through, big time. In fact, it has been some of the largest grant funding awards received by the organization in nearly a decade, or more. How much? Well, with 2011s Bremer funding alone, the organization would receive $120,000 over a three year period. Why then is the organization lacking a director? And why has there never again been a Mexican director since the founding Mexican director? We need answers.

Many of you will recall that Octavio Gomez and myself did visioning work at a series of power dinner meetings from 2008-2010 when Nelson Lozano was leaving Centro as director to return to Argentina. He wanted the leadership of the organization to be in the hands of Mexicans. He also wanted them to create a vision for what they wanted their Centro to do. And the community came together to do just that. The work was remarkable and detailed in its scope. To view the summary report findings click here. The Mexican community identified five areas of work that they wanted Centro Cultural to work on: 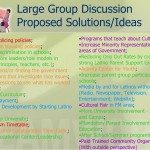 The community also suggested project work and solutions they wanted Centro to focus on. The public was gathered together and the results were unveiled. The recruitment of new board members began. I personally recruited several of Centro’s new board members. The results of that work (along with Duke’s mentorship) were provided to the new director Raul “Papo” Fernandez. However, none were implemented.

Every person I recruited to the board eventually came to me frustrated (and others who I had not recruited to the board) at the lack of direction and programming at Centro – and eventually they quit the board. But, not before attempts were made (by myself and board members who quit) to hold the board accountable to the mandate of the Mexican people in this community. The report of the community was presented to Raul Fernandez on more than one occasion. Despite this, there was no response from the board or the director.

Eventually, Mr. Fernandez summarily disappeared from the community and there was no announcement from the board about his leaving or about new leadership. An interim director position opened and Centro was opened for limited use again. People upset about the running of Centro frequently called to beg me (though I have never been on their board) to open the center when they had scheduled events, and no one was at the Center at the agreed upon times. This occurred numerous times. I also received angry reports of programming for Mexicans being canceled and/or complaints that the only programming available was not what the community had requested or envisioned. Service learning students from NDSU I spoke to said the after school programming they provided at Centro was not Mexican culture centered, nor did it primarily serve Mexicans.

It is hard to know who is at the helm of Centro these days. All attempts by myself and others to bring programming for Mexicans, use Centro as a facility to hold meetings/trainings/events, or otherwise discuss the report of the community vision for Centro’s work have been stalled or ignored by the board to this point.

Meanwhile, some of the most important policy, politics, and social movement changes in Mexican-American history are happening all around us. And, we have no base of operation to speak from, to meet at, to develop our voices and our leaders — as the people decided they wanted three years ago! As a community, we are left believing this is a result of apathy. But, that’s not true. It is a result of inactive leadership. We do not have to be silent or apathetic to this “occupation-of-do-nothingness”. Check out the stagnant Facebook for Centro. What about their stagnant website? Not a post, not an email, not a tweet. No programs, no vision, no message to a people in need of leadership. When was the last time they said anything about Mexicans anywhere? If you can’t think of anything, you are not alone. The silence is deafening.

Recently, I have been inspired by the Indigenous #IdleNoMore movement. And I believe it’s time we took back our Centro. Our Center is our balance, it is our place in this community and it should be ours again. We have a right to hold the leadership of Centro accountable to the Mexican people of the community whom they are supposed to serve. Cinco de Mayo in Mexico marks the day that Mexicans defeated the French and threw their oppressors out of the country.

This Cinco de Mayo, we have our own battle to wage for our community! We are going to occupy our Centro in protest. Be there to take back your community center and demand the programming and leadership that the people of this community have been asking for! Meet us outside of Centro Cultural at 4:30 with signs, Mexican Flags, and your passion.

Unidos Rally on Main Avenue Bridge in Fargo, May 2006. 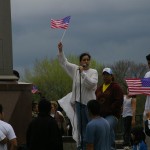 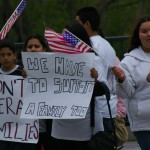 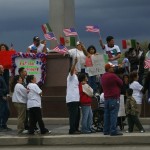 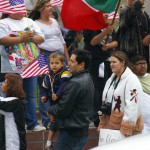 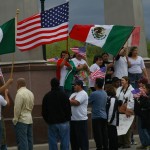 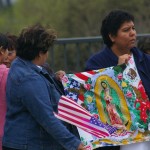 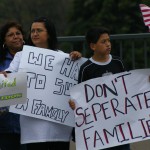 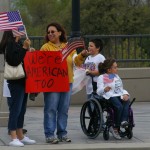 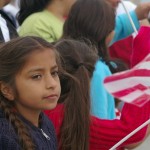 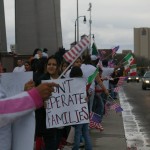 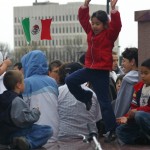 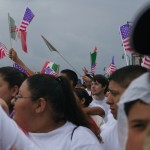 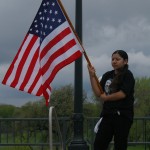 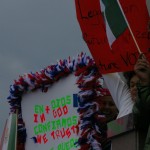 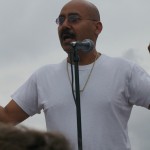 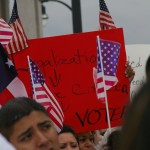 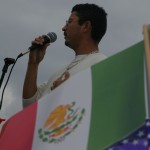 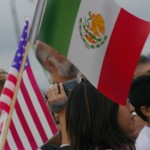 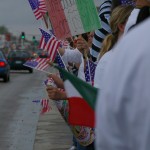 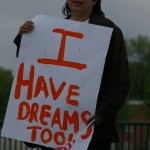 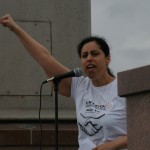 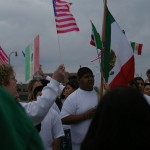 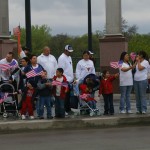 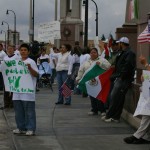 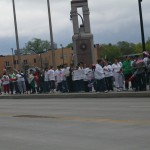