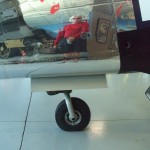 If you missed it, you missed it. Almost under the campus radar an incredible person visited NDSU Friday and delivered a thought provoking, humorous and inspiring story to a thousand people. Entitled “Different Kinds of Minds”, Temple Grandin (Doctor of Animal Science, professor, entrepreneur, author, film consultant and subject) spoke for over an hour on a wide range of things but primarily livestock handling and autism. Two subjects you would not normally associate, if ever. But in her case it’s only natural.

She explained first how people think. CEOs (“big picture” folk) think top down, details be damned. In her case, she said, it is bottom up, the details leading to the “big picture”. Due to our language-centric communications we tend to think verbally as well. Autistics think in pictures. She then contrasted man and animal, specific to her field of expertise, livestock. Their thinking is sensory based; smell, sound, posture, etc. So to better understand them, she got into their environment, literally making trips in the chutes leading to a slaughterhouse. The details she picked out which were alarming to the animals were mundane and revolutionary at the same time. A flag flapping above their horizon splotches of light or shadow, human forms along their path, all these things unsettled them and made them difficult to manage. She made significant changes to the routing of the animals into the slaughterhouse, creating curving and sweeping chutes which had a tremendous calming effect on her subjects. The industry has implemented many of her innovations improving the well-being of the animals as they are handled.

Then there was her “real job” teaching at Colorado State University. Throughout her talk she stressed how important it was to “do stuff”, work and interact with other people. She told how at an early age she was nearly committed to an institution, warehoused, as it were. But the things she loved doing and showed a talent for (drawing, building things, animals) saved her by making her (almost) fit in. She also noted, as do many successful people, an inspirational teacher who saw her gifts and possibilities that, in retrospect, would have to be incredibly conservative given what Grandin has accomplished in her life.

She has (almost unwittingly) become a champion of the autistic community, a badge of honor she now wears proudly. Her numerous books have helped parents, educators and, of course, those with the condition to better understand and exploit their talent. An HBO docu-drama on her life has won numerous awards and is a “pretty good” representation of how her life has evolved. Her two main points in making autism work were early diagnosis (by 4th grade you can tell; not talking, reading, etc.) and “doing” something. Find the area that appeals to the person, develop it and then stand back and watch out. As is true in most of us, we are good at some things, not so good at others. In the savant world, talents can be prodigious. Based on historical (and personal) observations Steve Jobs, Einstein, Van Gogh fit the “profile”. The kids at Pixar movie studios think like this as well. 3-dimensionally. Touch it. View it from many angles. She told the story of how a blind man got his vision late in life and, upon seeing his dog of many years didn’t “recognize” it until he touched it.

Grandin was not afraid to tell the audience what she thought of today’s society. She pointed out that there are more patent litigations going on than there are actual patented things! $80 billion a year is spent litigating them, enough to build 16 Denver airports. Maybe if the lawmakers in Washington put these things into such a perspective, she posited, they would get some perspective on just what they are talking about, not just some nebulous numbers floating around in their heads. Wall Street took a hit too for their lack of productivity. What we need most today are what we are least training, she said. Electricians, diesel mechanics, boilermakers, skilled tradesmen the type of which make the university buildings warm and lighted; they are a dying breed.

“Quirky but different” is her best description of the kids who need to be helped differently. If they are doing college level math, don’t make them do arithmetic. At the same time, maybe they don’t like to read so don’t force it. But find out what they need and get them moving. Grandin repeatedly used the term “recluse” which probably means that that is just what happens to a lot of these undiscovered talented people. Misunderstood and misdirected they go to their rooms and stay there. Temple Grandin says don’t let that happen..