Return to The Scoop 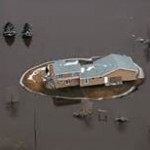 DEFENDING RICHLAND-WILKIN COUNTIES EDITORIAL – APRIL 11, 2013
Cash Aaaland, is a board member of the MnDak Upstream Coalition.  Telephone:  701-232-7944.  Email:  cash@aalandlaw.com.
*  IS FARGO MAYOR RISKING SAFETY OF HIS CITY?
*  DOES HE THINK ABOUT THE DEVASTATION HIS PLAN WILL CAUSE TO PEOPLE SOUTH OF FARGO?
The Mayor of Fargo recently made his celebrated annual trip south into Richland County and South Dakota to assess the snow pack and make his traditional flood prediction.  He likely drove by the golf community of Oxbow, for which the Mayor has promised to pay for six new designer holes to the private golf course, new club house, pool and 65 million state tax dollars’ worth of ring dike and expansion room for the 100 home community already protected well above the regulatory flood level.
He would have driven by the century farms, churches, two school districts, cemeteries, residences and through 50,000 acres of prime farmland that he plans to sacrifice for Fargo’s growth.
Eight miles into Richland County he would have driven by the residence of Mark Gauslow.  Gauslow was informed by letter last week from DA Chairman Vanyo that he may need either a ring dike or buyout as the reservoir will spread that far south.  Vanyo’s statements in his impact letters flatly contradict Fargo’s repeated statements that Fargo’s dam & reservoir will only impact 1000 acres and two residences in Richland Co.
As he moved south to survey the snow pack and coming water, I wonder if Mayor Walaker reflected upon his team’s repeated assertions that the temporary detention of that very same water won’t help Fargo.   He ignores the engineers of the Red River Basin Authority who say such retention would lower the peak flood in Fargo by two feet.  If holding back this water won’t help Fargo’s flooding, why did he drive for hours to view it?
On his return he likely drove through the low lying flood plain immediately south of Fargo, the one that protects Fargo from Wild Rice River flood waters; the same area Fargo has chosen to drain for development.   Although the Mayor claims it’s not about development – the dam/diversion plan would subsidize building in this area to the tune of $30,000/acre, according to the Army Corps materials.
The Fargo Mayor clearly sees no problem with the Army Corps position that the closer the retention is – the more affect it has.  So long as the retention area is moved four miles further away from Fargo, contrary to what was proposed by the Army Corps, but vetoed by Fargo.
Does it occur to the Fargo Mayor that the coming flood, promoted so diligently by his loyal media friends, is a non-event in Moorhead?  Moorhead’s competent leaders completed their affordable permanent protection and now have nothing to fear from the coming flood “Armageddon”.
Does Fargo’s Mayor feel responsible for risking his city by neglecting its dikes and levees just so the two billion dollar diversion can be made to appear more necessary?
I wonder if Mayor Walaker thinks about the devastation his plan will cause to the people south of Fargo, or the massive burden to the state’s taxpayers.  Or does he dream of all the recognition he might receive if he can just deliver this pork-barrel boondoggle?
pub-9418301962568207