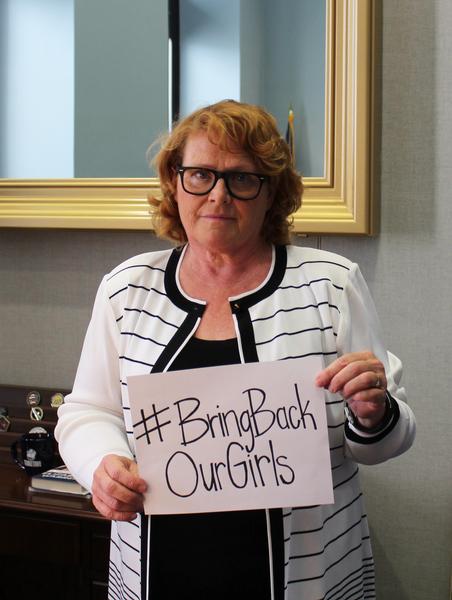 WASHINGTON, D.C. – U.S. Senator Heidi Heitkamp and the 19 other Senate women strongly condemned the abduction and continued mistreatment of more than 200 girls by the terrorist group Boko Haram in Nigeria and pressed for international cooperation to impose additional sanctions against the terrorist organization.

In addition to kidnapping the girls, Boko Haram has been tied to numerous other attacks in Nigeria in recent years that have resulted in thousands of deaths.

“These appalling actions are outrageous. Girls as young as 12 years old have been kidnapped and forcibly sold into slavery and possibly marriages – simply because they wanted an education,” said Heitkamp. “As a mother of two children, it absolutely pains me to know that heinous criminal acts such as this are happening, and we need to do everything we can to bring back these girls and hold the perpetrators accountable. Kidnapping and human trafficking cannot be tolerated. No girl, boy, woman, or man anywhere across the globe should ever be denied their basic human right to education. There is no place for this in the world and standing by and doing nothing is wrong.”

The terrorist group Boko Haram kidnapped more than 200 girls on April 14 from a secondary school in Chibok, Nigeria. The United States State Department has designated Boko Haram as a Foreign Terrorist Organization and has reported that the group has links to al-Qa’ida. In their letter, Heitkamp and the other women Senators urged President Obama to press the United Nations Security Council to add Boko Haram to the al-Qa’ida Sanctions List, which would compel additional nations to impose their own sanctions on the terrorist group. Click here to view the letter.

Since joining the Senate, Heitkamp has continued the work she started as North Dakota’s Attorney General and been a leader in Congress on combating human and sex trafficking. In addition to helping lead the charge to pass the Stop Exploitation Through Trafficking Act, which she helped introduce in November 2013, Heitkamp has coordinated efforts with leaders in the field. In September 2013, she led a Senate hearing on the issue to better understand the work being done on the federal, state, and local levels to combat human trafficking. In January, she met with Cindy McCain to strategize about efforts to combat sex and human trafficking. Heitkamp then traveled to Mexico with McCain and Sen. Amy Klobuchar (D-MN) to discuss joint efforts to combat human trafficking in the U.S. and Mexico. And recently, Heitkamp and Klobuchar joined McCain and led a panel to discuss international sex trafficking at the McCain Institute for International Leadership’s annual Sedona Forum in Arizona.